Since 1999, The Aerospace Corporation has been a pioneer in the design, construction and flight of ultrasmall satellites. Learn about our past and future satellites.
SmallSats HomeAeroCubes HistoryCubeSat Milestones
Scroll for more content

The Aerospace Corporation began pioneering the design, construction and flight of ultrasmall satellites in 1999, developing an inexpensive, lightweight spacecraft that used the latest miniaturized electronics and microelectromechanical systems.

As demands for greater small satellite capability continue to grow, Aerospace continues to research and develop ever-higher-performing technologies for small satellite bus systems and payloads, ensuring effective on-orbit systems far into the future. (Take a virtual tour of our xLab)

The numbering of the AeroCube fleet is chronological from when the mission started development, however the dates in parentheses are the launch dates.

SLINGSHOT 1 (2022): A 12U CubeSat that leverages a commercial bus and ground segment rather than the AeroCube bus and ground network. The goal is to simplify the architecture with open standards and plug-and-play interfaces to streamline bus-to-payload, satellite-to-satellite and space-to-ground communications.

AEROCUBE-16 (2022): A technology demonstration in Low Earth Orbit, consisting of a pair of 6U CubeSats hosting a number of advanced materials experiments. Technical data from AeroCube-16, including results from this experiment, will be used to validate ground test data and inform future research.

LOW-LATITUDE IONOSPHERE/THERMOSPHERE ENHANCEMENTS in DENSITY (LLITED) (2022): A pair of 1.5U CubeSats that will measure two particular features of the nighttime upper atmosphere simultaneously, which will be a milestone for on-orbit CubeSat capability and improve atmospheric models.

AEROCUBE-15 aka AEROSPACE ROGUE ALPHA/BETA CUBESATS (2019): These 3U CubeSats were developed on a tight timeline of 18 months and demonstrated that rapid reconstitution of mission capabilities is possible.

AEROCUBE-14 (2019): Two 3U CubeSats that demonstrated a standardized interface for modular experiments that reduces the challenges of integration and launch.

AEROCUBE-12 (2018): Two 3U CubeSats that demonstrated the capability of a new star-tracker, a variety of nanotechnology payloads and advanced solar cells.

AEROCUBE-11 (2018): A pair of 3U CubeSats that demonstrated the technological capability of two imaging sensors, developed by Aerospace.

AEROCUBE-10 (2019): These 1.5U CubeSats are the smallest spacecraft to have performed a proximity operation as close as 22 meters from each other. They also deployed atmospheric probes to measure air density.

AEROCUBE-4 (2012): AeroCube-4 established the state of the art for CubeSats by evolving from a tech demo platform to a fully functional mission-oriented spacecraft, including the first 3-axis stabilized control system with 1 degree pointing accuracy.

PICOSATELLITE SOLAR CELL TESTBED-2 (PSSCT-2) (2011): This was our first 3-axis stabilized NanoSat. Of note, it took the last picture of a shuttle on-orbit (Atlantis).

PICOSATELLITE SOLAR CELL TESTBED (PSSCT) (2008): This was the first demonstration of a solid rocket motor propulsion system on a CubeSat. The core foundation of the AeroCube program was based on PSSCT-1 and PSSCT-2. 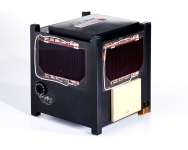 MEPSI-1 (2002): This demonstrated a human-rated container­ized satellite ejection system for the U.S. space shuttle Endeavour. The first CubeSat deployer would fly the next year.

MIGHTYSAT II.1 PICOSATS (2000): These copies of the OPAL picosats demonstrated operation of ejected spacecraft after one year of on-orbit storage.

Aerospace’s Concept Design Center (CDC) continues to empower and mentor the next generation of engineers through internships—providing hands-on opportunities for real-world impact.
January 2023

How Aerospace is Advancing Sensor Capabilities for Wildfires

With the effects of climate change becoming more prominent, Aerospace is leveraging technology and lessons learned to improve wildfire detection and monitoring.
January 2023

Aerospace developed a critical sensor to study the effects of ionosphere scintillation, a natural occurrence that disrupts radio signals, communications, and GPS navigation.
November 2022
View All

CRYSTAL CITY, Va., May 24, 2022 – The Aerospace Corporation (Aerospace) announced today that John Galer has joined the company as the new chief of government relations.
May 2022

The Aerospace Corporation’s (Aerospace) Atomic Planar Power for Lightweight Exploration (APPLE) concept, which could expand human exploration of the deepest parts of the solar system faster than ever ...
April 2021
View More Press Releases