From chemistry and physics to robotics and aeronautics, the next generation of STEM participated in the 45th annual Robert H. Herndon Memorial Science Competition.
Scroll for more content

The future of STEM participated in the 45th annual Robert H. Herndon Memorial Science Competition. Brought back this year, the experiment contest challenged student teams to demonstrate their innovation across a variety of science disciplines — from chemistry and physics to robotics and aeronautics. This year’s science essay competition theme aligned to the space domain’s increasingly rapid development, asking bright middle and high school students to submit works that delved into the topic of Exploring Our Diverse Universe. 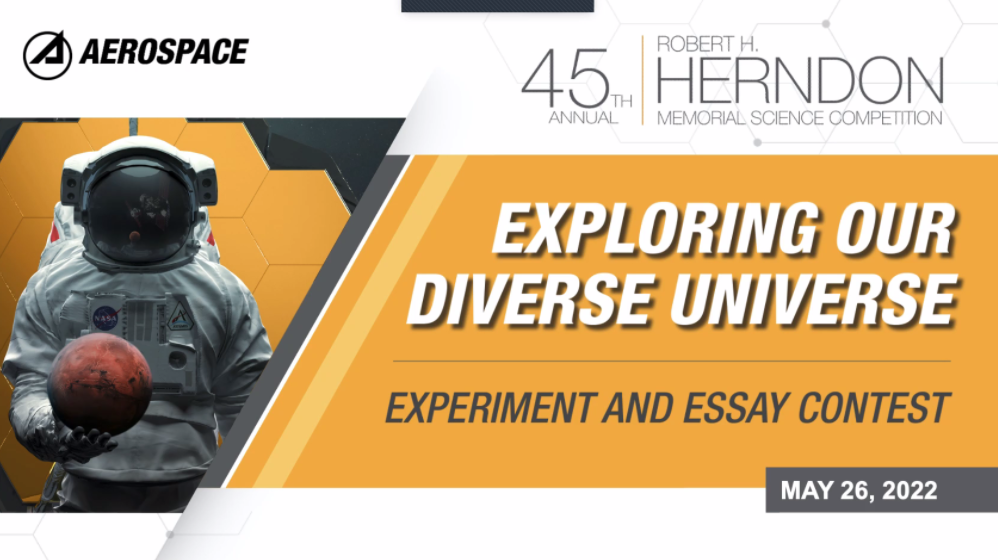 "The theme this year is diversity, emphasizing that a diverse approach is vital to continue learning about our universe,” said Dr. Gretchen Lindsay, General Manager of Aerospace’s Communications Technologies and Engineering Division, during her welcome remarks. “As aspiring scientists, each of you has the power to design new technology, solve challenging problems and answer questions about our world that will shape and reimagine our future in space, on this planet and maybe even other planets like Mars.”

The competition is named after the late Robert H. Herndon, who served as an engineer, manager and mentor to many at Aerospace. Herndon was the first Black engineer at North American Aviation. He joined Aerospace as a structural engineer in 1961 and eventually became a group director of the Advanced Mission Analysis Directorate.

The annual event was established for middle and high school students in Los Angeles County in 1977, and an East Coast counterpart for the Washington D.C.-area began in 2000. The competition’s guiding objective is to spark and encourage interest among unrepresented students in science, engineering and technology, and increase diversity across the aerospace sector.

Recently, Aerospace had the opportunity to judge four regional science fairs in the Washington-D.C. area. In addition to giving community awards at each event, Aerospace invited 79 student projects to participate in the Herndon Science Competition. A total of 25 different schools from the West and East Coasts were represented in this year’s competition.

The Essay Evaluation Committee judged 11 works based on a set of criteria, which included the quality of analysis and demonstrated technical depth according to the writer’s grade level. For the experiment contest, judges reviewed 29 abstracts and selected the top entries for final judging. Prior to their live presentations, finalist teams could request support from an Aerospace advisor.

"I want to congratulate all of you for competing in Aerospace’s longest-running science competition,” said Carpenter. “And I applaud you for challenging yourselves and pursuing extra activities that will help you find your passion. Having passion and believing in yourself are both very important and will sustain you as you reach for your dreams. I encourage all of you to dream big.”

Both shared their journey in finding and pursuing STEM, challenges they faced and overcame, and key figures that provided guidance, including high school teachers and Aerospace mentors. For Itzel, participating in her high school’s robotics club helped her find a place of belonging and set her on her STEM path.

“I was so amazed at what these students were doing, and I felt like I was missing out on a cool experience,” said Itzel. “It was a challenge to explore this new extracurricular, especially because I had no experience in robotics. Over time, I have grown and learned. I realize now that the high school robotics club was much more than competing in tournaments. This was a network of students of color who were changing the image of my hometown through STEM.”

Aerospace by the Numbers

The Aerospace Corporation operates the FFRDC for the space enterprise. Our approximately 3,000 technical experts span every discipline of space-related science and engineering, with over 780 employees...
December 2020

AR2020: Navigating Through the Perfect Storm

In a year of unprecedented change and disruption, The Aerospace Corporation delivered on its mission serving the space enterprise through technical expertise and strategic insights that will help shap...
December 2020
View More News

Stephen W. Preston Elected to Aerospace’s Board of Trustees

The Aerospace Corporation has elected the Honorable Stephen W. Preston, former general counsel of the Department of Defense (DoD) and the Central Intelligence Agency (CIA), to its Board of Trustees.
June 2022

CRYSTAL CITY, Va., May 24, 2022 – The Aerospace Corporation (Aerospace) announced today that John Galer has joined the company as the new chief of government relations.
May 2022