The Small Satellite Cost Model is the result of over 30 years of Aerospace study. Traditional models are based on larger space systems and tend to drastically over-predict the development costs of smaller (up to 1000 kg) satellites making this one of the most relevant and credible small spacecraft cost models available.
Click Here to Obtain the SSCM Software 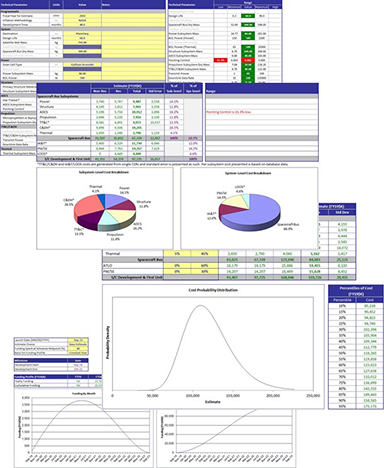 The Small Satellite Cost Model (SSCM) is a parametric cost model that is the end result of more than 30 years of study at The Aerospace Corporation. Its development was motivated by the observation that traditional cost models—based on larger civil and military space systems—tended to drastically overestimate the development costs of modern, smaller satellites (post-1990 and up to 1000 kilograms). SSCM remains one of the most relevant and credible cost models today for performing cost estimates of small spacecraft.

SSCM employs a parametric methodology for estimation of program cost. It is best suited to the early, conceptual development phase of a spacecraft program when cost and performance trades can be easily performed. A collection of cost-estimating relationships is included that estimate the costs of developing and producing a spacecraft system with the following subsystems:

The latest version, SSCM19 (released December 2019), estimates the development and production costs of a small satellite bus for Earth-orbiting or near-planetary spacecraft. The model is based on an underlying database of actual, as-flown technical and cost data provided by spacecraft bus manufacturers.

SSCM19 has numerous features, including the inclusion of cost-risk and funding profile analysis. The model is available free of charge to eligible requestors (see How to Obtain the SSCM Software).

In general, a new version of the SSCM is developed whenever a significant number of new missions are added to the SSCM database. Currently, the model is planned to be released approximately once every two or three years. This ensures that the model properly reflects the latest trends in cost-efficiency and technology development, with the most up-to-date database of spacecraft buses.

SSCM19 is available to organizations in the U.S. and abroad, subject to review by the Aerospace Export Control Office.

The SSCM 2019 User’s Manual is subject to a restricted release policy, and is supplied, along with the model, directly to the licensee or user. There is no electronic download available.

For any questions regarding SSCM, please contact the SSCM team.

NROL-85 Launch: A Mission of Milestones

Aerospace leveraged innovative tools of the Future STARS platform on the front line to deliver on the mission to advance National Security Space needs.
May 2022

Aerospace is dedicated to delivering mission success from an enterprise perspective, supporting its government customers with continuous engagement and a unique perspective that spans across a broad r...
January 2022
View More News