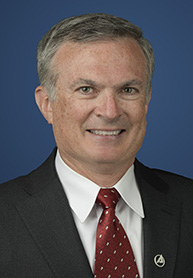 In his role, Whelan will assume leadership of a group that is working closely with the Department of Defense (DOD) and the intelligence community.

“This is a time of great change in the space domain and Marty’s experience with national security space strategy across the DOD and the intelligence community makes him the perfect person for this role,” said Steve Isakowitz, Aerospace president and CEO. “We are placing a priority on addressing the threats to our national security space leadership. Marty is a leader who can work at the enterprise level and apply strategic thinking, innovation, and Aerospace’s technical depth to solve the nation’s toughest problems.”

As director of Future Operations for the Air Force, Whelan developed a comprehensive National Security Space Strategy, integrating the objectives and goals for the intelligence community and the DOD. He also led a strategic review of DOD and intelligence community space systems to develop a mission assurance framework for national security space systems, and drove an operational suitability review for satellite constellations, ground-based space systems and cyber systems.

Whelan earned a bachelor of science degree in aerospace engineering from Parks College of Saint Louis University, as well as an M.A. in acquisition and contract management from Webster University and an M.S. from the Industrial College of the Armed Forces at the National Defense University.

As part of his transition to Aerospace, Whelan has begun serving as vice president, Special Studies. On Dec. 1, 2018, he will assume the role of SVP, Defense Systems Group. The role’s current incumbent, Ed Bolton, will transition to SVP Special Studies until his retirement.

The Aerospace Corporation is a national nonprofit corporation that operates a federally funded research and development center and has approximately 4,000 employees. With major locations in El Segundo, Calif., Albuquerque, N.M., Colorado Springs, Colo., and the Washington, D.C., region, Aerospace addresses complex problems across the space enterprise and other areas of national significance through agility, innovation, and objective technical leadership.  For more information, visit www.aerospace.org. Follow us on Twitter: @AerospaceCorp.

Aerospace Elects Three Members to Board of Trustees

Aerospace has elected three leaders to its Board of Trustees with experience in sectors that span the space enterprise.
December 2019

Todd Nygren will assume leadership of the world-class engineers and scientists who are addressing the nation’s hardest problems in space.
December 2019

Aerospace Elects Top Space Leaders to Board of Trustees