A standardized form factor known as Launch-U could make it easier to launch satellites that are too small to merit a dedicated launch vehicle but too big for a CubeSat deployer.

How do you most efficiently launch small satellites?

To answer that question, a consortium of industry, academia, and government has developed a new standard called a Launch Unit (Launch-U) and released it during the Small Satellite Conference in Logan, Utah.

Launch-U, which came from a group including The Aerospace Corporation, Cal Poly San Luis Obispo, Moog CSA Engineering, Spaceflight Industries, SpaceX, Tyvak, United Launch Alliance, Virgin Orbit, and VOX Space, lays out launch specifications for satellites between the size of a toaster and a small refrigerator.

“With the Launch Unit standard, we’ll be able to maximize the efficiency of the launch vehicle fairing and fill it up with more satellites and thereby increase access to space for everybody,” said Carrie O’Quinn, senior project engineer for Aerospace’s Research and Development Department and the Launch-U lead.

CubeSats are a standard size, which makes launching them rather simple. A launch vehicle can hold a certain number of CubeSats, and one CubeSat can be switched for another if there is a change in plans. In contrast, large satellites merit their own launch vehicles. But what about midsized smallsats, specifically those between the size of a 12U CubeSat and an EELV secondary payload adapter (ESPA) class satellite?

It turns out, there are no standards for this class of satellites, which means each satellite generates its own launch integration requirements for each respective launch vehicle. This is simply not efficient and creates challenges for satellite developers and the launch community—and the situation will only be exacerbated as the number of smallsats continues to grow. Industry experts estimate that 6,000 to 20,000 smallsats could be launched over the next 10 years.

The Launch-U tackles this issue, addressing the physical properties of midsized smallsats as well as their mechanical and electrical interfaces with the launch vehicle.

Just as the CubeSat definition standardized the launch interface, the Launch-U could have the same revolutionary impact on the industry, making better use of cargo space on launch vehicles and providing more flexibility with regard to launch opportunities.

“With the Launch Unit standard, if your intended ride to space doesn’t work out, you could simply switch to another ride that day—similar to how you can load a shipping container onto one ship or another without any need for special interfaces,” said Andre Doumitt, a systems director in the Innovation Development group at Aerospace. 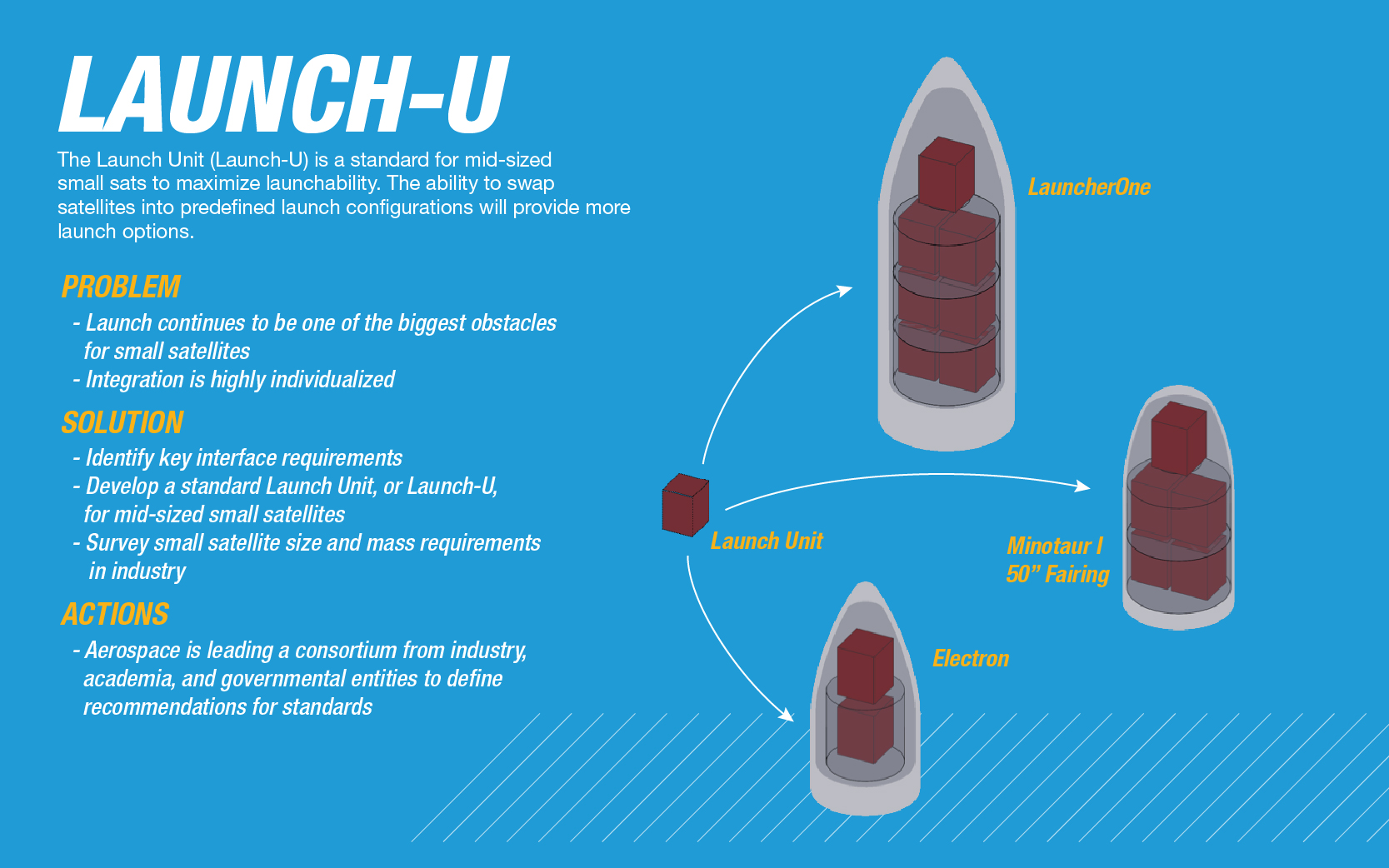 As it becomes possible to swap satellites into predefined launch configurations, more launch opportunities will become available for everyone.

“Similar to what happened in the shipping container world, if more satellite makers can get a ride when and where they want, demand will grow, which benefits all players in the satellite industry—launchers, satellite builders, government customers, and commercial end-users,” Doumitt said.

Launch-U is poised to make a difference. According to Chad Foerster, Virgin Orbit’s manager of Second Stage Structures and Mechanisms: “The synergy between The Aerospace Corporation’s extensive history of providing comprehensive engineering support and mission assurance activities for national launch, along with the innovative and disruptive ideas of new space entrants, will help change the paradigm of delivery of small satellites into space.”

This story appeared in the September 2018 issue of Getting It Right, Collaborating for Mission Success.

Over a 12-year period, the spacecraft will travel to various asteroids—including Jupiter’s Trojans—to further piece together the history of the solar system.
October 2021

Aerospace ensured mission success in the delivery of a vital missile warning and situational awareness satellite.
May 2021
View More News

The Aerospace Corporation (Aerospace) announced the selection of the Honorable David Radzanowski as the company’s Chief Financial Officer, bringing on the veteran space executive and former NASA CFO t...
June 2020