The space instrument studies sources and sinks of carbon dioxide in oceans and terrestrial ecosystems on Earth.

Since the beginning of the Industrial Revolution, the burning of fossil fuels for energy has caused carbon dioxide concentrations in the atmosphere to rise at an alarming rate. While other greenhouse gases have also increased due to human activity, carbon dioxide is far more abundant and remains in the atmosphere much longer. In fact, increases in atmospheric carbon dioxide are responsible for about two-thirds of the total energy imbalance that is causing Earth's temperature to rise, presenting a fundamental threat to humanity and life on Earth.

The Aerospace Corporation has provided direct support to NASA’s Orbiting Carbon Observatory Project (OCO-3), a NASA-JPL instrument designed to measure carbon dioxide in Earth's atmosphere. Mounted upon the Japanese Experiment Module-Exposed Facility on board the International Space Station (ISS), the instrument identifies sources and sinks of carbon dioxide in oceans and terrestrial ecosystems. In addition, OCO-3 data are expected to significantly improve our understanding of the sources and impacts of carbon dioxide emissions from human activities, using measurements over cities and other areas of interest.

A major component of Aerospace’s support of OCO-3 is LunarCal, a flight software module that Aerospace developed and delivered to assist with instrument calibration that uses the moon as a reference source to calibrate the payload sensors. The previous OCO mission used a comprehensive series of calibration capabilities allowing it to observe the Sun, the moon and on-board lamps to calibrate. Because OCO-3 cannot observe the Sun, lunar observations are more critical for tracking the characteristics of its calibration lamps, which vary with time, according to the OCO-3 Science Team. Richard Dolphus, Senior Engineer Specialist in Aerospace’s Control Analysis Department (CAD), shared that OCO-3 “needed a more reliable, constant reference and the moon itself is what they found they could use.”

To capture images of the moon for calibration, the LunarCal flight software module provides azimuth and elevation angles to the instrument flight software. LunarCal also includes internal checks to provide for safe operation, incorporating calculations to predict the positions of the ISS solar arrays and radiators that could obstruct the instrument’s field of view.

“One challenge for OCO-3 is that the structure of the ISS itself tends to block the moon for much of the year, so there may only be 15 or 20 days out of the year where you have an unobstructed view of the moon from the ISS,” said Andy Wu, Engineering Specialist at Aerospace’s Attitude Estimation and Calibration Section in CAD. “While LunarCal doesn’t allow us to capture images of the moon at will, it allows us to track the moon whenever the moon is in the small window that is available to us and make the most of that opportunity.” 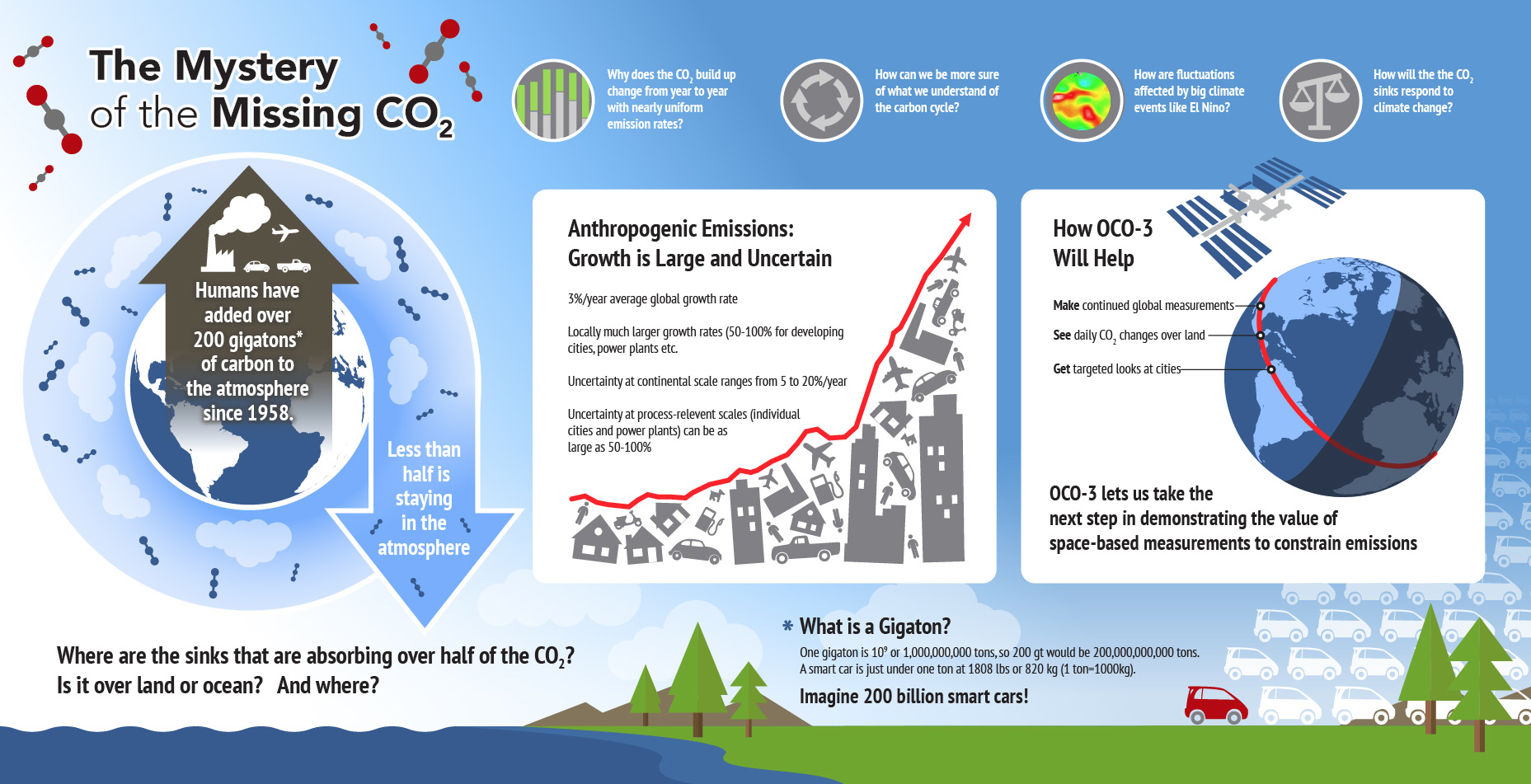 On Sept. 16, 2020, LunarCal was successfully exercised as part of the first calibration sequence for OCO-3, marking the culmination of much direct, shoulder-to-shoulder work with the OCO-3 Project at the Jet Propulsion Laboratory.

In December 2020, a second calibration sequence was successfully executed, at which time LunarCal assisted in providing the OCO-3 science team with approximately 20 clean sweeps across the moon, providing critical sensor calibration data to be used for making more accurate carbon measurements.

Another key element of Aerospace’s support of OCO-3 was to calibrate the payload Azimuth and Elevation gimbal alignments. “This calibration ensures that when the OCO-3 instrument provides information about location, that it’s highly precise. This is all due to our expertise in instrument calibration,” said Justin F. McNeill, Jr., Senior Project Leader at Aerospace’s Systems Formulation and Implementation department. “It’s all about making sure that the instrument is behaving as designed, and as you command it.”

Currently on a three-year mission, OCO-3 will be another step toward monitoring emissions hotspots, volcanic eruptions and other local carbon sources from space. In addition, OCO-3 will give scientists the first opportunity to observe how carbon dioxide concentrations change throughout the day in many parts of the globe, while also detecting changes in emissions and photosynthesis rates.

OCO-3’s high-resolution spectrometers can also observe solar induced fluorescence, a type of radiation emitted from plants during photosynthesis, providing scientists additional insight into the carbon cycle of forests and plants. As climate change has a direct impact on growing seasons worldwide, researchers need to understand when photosynthesis is occurring, especially in inaccessible locations like the Arctic.

Aerospace’s software support for the OCO-3 mission contributed to its success, requiring customization based on mission-specific needs.

“We worked with JPL closely, albeit remotely, and iterated with them quickly so that the software would meet their requirements,” said Avinash Vakil, Senior Member of Technical Staff at Aerospace. “Our communications with JPL enabled us to understand the architecture of their software and the context in which it would be running, so that when we did go write the software, we were able to write it to fit within their system with very little problem.”

NROL-85 Launch: A Mission of Milestones

Aerospace leveraged innovative tools of the Future STARS platform on the front line to deliver on the mission to advance National Security Space needs.
May 2022

Aerospace is dedicated to delivering mission success from an enterprise perspective, supporting its government customers with continuous engagement and a unique perspective that spans across a broad r...
January 2022
View More News