The SiGe heterojunction bipolar transistor (HBT) is the first practical bandgap-engineered device to be
realized in the silicon material system.

Microelectronic device and circuit designers have long sought to combine the superior transport properties and design flexibility offered by bandgap engineering (as routinely practiced in compound semiconductors such as gallium arsenide and indium phosphide), with the high yield and low cost of conventional silicon (Si) fabrication. With the introduction of epitaxial silicon germanium (SiGe) alloys, that dream has finally become a reality. 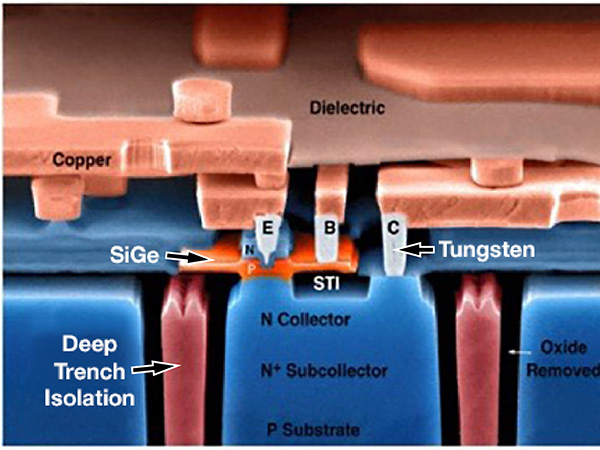 The notion of integrated circuit reliability must be broadened beyond classical interpretation to address:

•  robust operation from direct current to near-Tera Hz speeds, under both static and dynamic electrical stress, as a function varying impedance environments and feedback mechanisms

Scanning electron micrograph of a SiGe HBT. The SiGe alloy is shown in orange.

This story appears in the March 2020 issue of Getting It Right, Collaborating for Mission Success.