Creating a Path Through Contested Space

Engineers at Aerospace’s Mission Analysis and Operations Department have been focused on the problem of space traffic management (STM), and in 2018 they devised a solution for tracking orbiting objects. 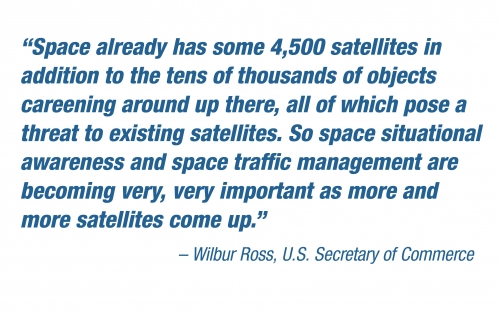 Working with Aerospace laboratories, they created the first prototype of an onboard GPS transponder for satellites and launch vehicle upper stages to actively communicate with tracking stations. The concept for the prototype was originally developed in conjunction with iLab, Aerospace’s research and innovation center. As envisioned, the device would transmit GPS data (position, velocity, and time) as well as a unique serial number.

The encrypted signal would be received by ground- or space-based receivers and forwarded to a central coordinator for orbit determination and collision-risk assessment. The increased speed and accuracy would vastly improve calculations of collision probability and reduce the number of costly false alarms.

Meanwhile, Aerospace’s Center for Orbital and Reentry Debris Studies (CORDS) continued to showcase its position as a world authority on spacecraft reentry and STM.

One activity was the continuous monitoring of the reentry of Tiangong-1, China’s first space station. The deorbiting Tiangong-1’s homecoming was of supreme interest to the space industry and the public; it kept aerospace agencies and companies worldwide busy trying to estimate the date and time of its return. As the world watched, Tiangong-1 reentered Earth’s atmosphere on April 1, 2018, at 5:16 p.m. PDT. As CORDS predicted, most of the space station burned up upon reentry, with any remaining space debris falling into the South Pacific Ocean.

The U.S. administration announced a plan in early 2018 to significantly increase the Department of Commerce (DOC) role in supporting “American Leadership in Space.” The DOC Strategic Plan prioritizes the focus on “Expanding Commercial Space Activities,” which includes three primary activities: 1) expanding the Office of Space Commerce; 2) active participation in the National Space Council as a key member; and 3) support of American companies operating in space.

Over the past 20 years, Aerospace has used its analytic capabilities and trusted advisory role to perform in-orbit collision analysis and reentry analysis of rocket bodies, satellites, and other orbiting objects, enabled by our expertise in atmospheric physics, materials science, and orbital mechanics. This expertise has been used to support the needs of Aerospace’s customers, both military and civil.

This article was featured in the Aerospace 2018 Annual Report.