Strengthening the cybersecurity of space assets is a critical aspect in outpacing the threat. The Aerospace Corporation is exploring ways these systems can leverage the laws of physics to remain provably secure.
Watch The Space Policy Show
Scroll for more content
October 27th, 2020

The advent and proliferation of space-based technologies has very rapidly transformed the modern world. Yet, for all the technological and innovative advantages that space assets enable for the growth of the global economy, improvement on quality of life and stability of national security, the systems themselves are surprisingly vulnerable. As more entrants to the space enterprise emerge, new threats and risks must be accounted for to ensure the infrastructure is agile and adaptable enough to respond to any potential challenges.

A key aspect in outpacing the threat is the need to strengthen the cybersecurity of space assets to ensure the integrity of communication. To stay ahead in the encryption arms race, The Aerospace Corporation is exploring ways these systems can leverage the laws of physics to remain provably secure. 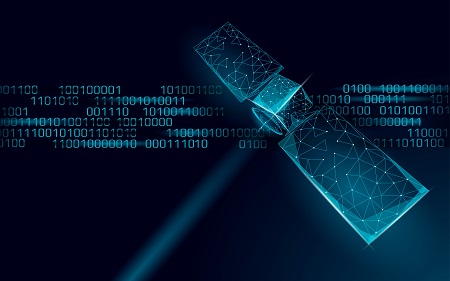 Using an emerging technique called quantum key distribution (QKD), satellite networks could potentially prevent the interception of sensitive data, such as for those used for orbital maneuvering or in military communications for the warfighter.

Aerospace is developing a proof of concept of QKD for space systems while also investigating its regulatory and market implications. A new report from Aerospace’s Center for Space Policy and Strategy (CSPS) titled Challenges and Opportunities in Space-Based Quantum Key Distribution details the benefits of this new paradigm, as well as the actions required for its mainstream adoption.

Traditional encryption involves sending a scrambled message and a key for deciphering it as a binary stream of 1s and 0s (called classical bits) between authorized parties. Sophisticated hackers can copy encrypted messages, then later exploit their vulnerabilities to access the encrypted data – all potentially unbeknownst to the sender and receiver. Attackers can leverage future increases in processing speed to capture data today that they can crack in the future.

Quantum information systems use a different unit called a qubit (quantum bit), which possesses the properties of a self-destructing code. The information carried by a qubit is encoded in a quantum state, representing multiple combinations of 1s and 0s simultaneously. Due to its fragile nature, measuring this state alters it, and any information about its initial state prior to the measurement is lost.

Therefore, receiving and interpreting a quantum signal can only be done once, as even the first attempt at reading it would result in its destruction. The no-cloning theorem in quantum mechanics prohibits the replication of an unknown quantum state, so trying to copy and restore the signal back is physically impossible. Thus, the receiver would immediately know if there had been an eavesdropper.

Currently, qubits are used in ground networks to generate cryptographic keys that cannot be copied now or cracked in the future. The Aerospace Corporation is exploring ways to deploy QKD in space.

In the United States, a number of financial services firms already use QKD to transmit data through fiber-optic cables. However, these signals can only travel so far through fiber before degrading, limiting their range. They are also currently rely on ground fibers, making the current approach untenable for space systems.

“Because of the signal loss in the fibers, you could only take the link to a few hundred kilometers,” said Dr. Uttam Paudel, Laboratory Manager in Aerospace’s Photonics Technology Department. “From a defense point of view, that’s not very exciting. If you’re exchanging information between distant ground systems, or satellite and ground, you need a long-distance connection and fiber is often not an option.”

Beaming qubits thousands of miles to satellites and ground stations presents a new set of challenges, but Aerospace is helping to make this concept a reality.

Although other research institutions are examining pieces of space-based QKD, such as the formation of qubits, Aerospace has constructed “a true soup-to-nuts experiment” to validate the full process, said Dr. Joseph Touch, a Senior Distributed Systems Architect in Aerospace’s Information Systems and Cyber Division. Touch and Aerospace Technology Strategist Lori Gordon co-authored the recent CSPS report on QKD.

“To do this work in earnest, you need boots on the grounds – hands on the hardware,” Touch said. “Our theoretical partners are impressed with our implementation experience, and they come to us when they need that hands-on perspective.”

Unlike other experiments of its kind, the project utilizes commercial off-the-shelf (COTS) parts, which will make future systems cost-effective, especially at the scale of large satellite constellations planned for low Earth orbit.

“We have an end-to-end QKD test bed in our lab that allows us to understand how these structures would work at a system level and the cost components to get the job done,” said Dr. Andrew Mollner, a Senior Project Leader in the Photonics Technology Department. “It allows us to really to poke at it from a system level and understand what it would take to get to a space system.”

A Matter of Trust

Concurrently, Aerospace’s CSPS is examining the policy actions required for widespread adoption of QKD aboard satellites. The center’s work reveals a complex web of government and industry standards organizations – most unrelated to space – that must reach a consensus on the reliability of QKD for broader cybersecurity.

From a funding perspective, QKD must compete with higher-profile efforts such as quantum computing for a slice of investment and priority on the national research agenda. Progress has been relatively slow, and the U.S. stands at a crossroads, Gordon explained.

“But momentum has been building,” Gordon said. “Recently  Congress, urged by several scientific societies and as well as growing quantum competition from global players, invested $1.2 billion for quantum research. Only $3 million went toward quantum key distribution. Yet around that time, China launched a satellite demonstrating QKD over a ground system. All of this sets up the need to understand the implications and viability of QKD.”

The paper finds that formal standards for QKD, driven collaboratively by private and public sector stakeholders, will be critical for greater adoption and investment. Until then, uncertainty will hinder further development.

“You can’t launch it if you can’t trust it,” Touch said. “We have a huge chasm between lab testing and trusted use in national security, particularly for space payloads. Right now, nobody can have full confidence in QKD.”

Aerospace is working to bridge this divide, leveraging quantum expertise and its unique vantage point in the space enterprise. Ultimately, the team’s objective technical guidance will help shape the future of secure communications.

“The goal,” Paudel said, “is to be gaining enough hands-on knowledge so we can advise the government as they’re investing more heavily so they’re making wise decisions.”