Solar Gravity Lens: A Three-Decade Journey of Innovation at Aerospace

When presented with a challenge by NASA to create a viable architecture for imaging exoplanets, Aerospace provided a solution built on a legacy of nearly 30 years of persistence, innovation, and company-wide teamwork.
June 29th, 2020

Well before the era of cubesats, the small satellite revolution started in the laboratories of The Aerospace Corporation. In 1993, three visionary researchers wrote a paper on the concept of the nanosatellite and assembled a community of interest to study emerging miniaturization technologies. There are now over 400 nanosatellites in orbit and launch rates have doubled every 2.5 years.

Satellites for a New Era of Space

In the early 1990s, launching payloads to low-Earth orbit required a huge investment ($30,000/kg) while miniaturization techniques for electronics and mechanical devices were rapidly developing. Aerospace scientists created a vision for small satellites that could potentially deliver remote sensing and communication systems to orbit at a fraction of the cost. Using a combination of Aerospace research and development funds and external grants, Aerospace scientists Ernest Robinson, Henry Helvajian, and Siegfried Janson created a community of early adopters, including visionaries in the National Security Space community.

“There was no organization in the United States that could take on the task of something like this,” Helvajian said. “It had to be something like Aerospace. Universities are too small for this type of interdisciplinary challenge and private companies have commercial reasons why they won’t do it. So, you need a national lab organization like Aerospace in space systems to be able to put the vision out there, hold firm to it and follow through on that vision until the engineering and scientific principles mature to a point where other entities become interested and will engage with the technology. But it requires an Aerospace to start.”

Due to several concurrent developments in micro/nanoelectronics, communications, photonics, power, materials development, and the increasing “cloud”-based computational capabilities now widely available in handheld and small mobile devices, small satellites have become a reality, and there is no evidence to suggest that the exponential growth rates should not continue.

“We are now living in an age of uncertainty and of many possible futures,” Helvajian said. “The architecting of future space systems needs to be adaptable, reconfigurable, and able to run scenarios both in space and on the ground to give our decisionmakers more insight.”

Small satellites are now being used for numerous missions, including the recent Mars planetary visit by JPL’s Mars Cube One satellites, but some applications have yet to be imagined.

A prime example is the Solar Gravity Lens Project, which uses nanosatellites to send a fleet of optical telescopes to image habitable planets far from beyond our solar system. The concept is based on using the sun’s mass as a gravity lens and has been under discussion in the scientific community. JPL turned to Aerospace to develop an architecture that could capture these stunning images within realistic budget and time constraints.

“We are grateful to Dr. Slava Turyshev and NASA/JPL for inviting Aerospace to participate in this amazing project – hoping to help to answer the question, ‘are we alone in the universe?’” said Tom Heinsheimer, Aerospace’s technical co-lead for SGL. “As Einstein predicted, light from any star, no matter how far it is from us, is focused by solar gravitational bending onto a Solar Gravity Line (SGL) that starts at 550 AU from Earth. This means that common sets of mass-produced spacecraft can be sent to many SGLs to look for signs of life on exo-planets orbiting many exo-solar systems. Our work on the NIAC III program will mature the needed technologies, to enable a Technology Demonstration Mission to prove the viability of the concept.” 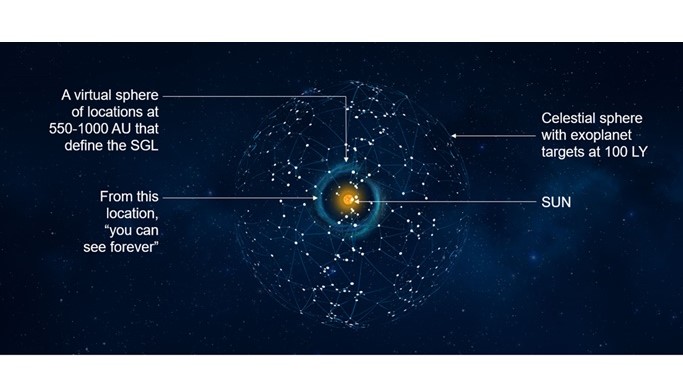 Building on their knowledge of small satellites and their proven capabilities, Aerospace proposed an architecture that will meet mission goals. This architecture uses multiple small satellites, propelled with solar sails (for high exit velocities), in an innovative “string of pearls” architecture in which each pearl comprises a cluster of formation-flying small satellites. As pearls are sequentially launched, they provide the required communication relays, observational redundancy, Artificial Intelligence based “mentor-student” learning, technology upgrading, and data management needed to perform the mission. By employing these small satellites using Artificial Intelligence technologies to operate independently, mission cost and risk are reduced.

As a result of this work, Aerospace is part of a team that has been awarded a NASA Innovative Advanced Concepts Phase III grant, where the mission concept will be further refined leading to a technology demonstration mission in the 2023-24 timeframe and a full-scale mission a decade later.

The Aerospace laboratories were an incubator and technology push of a radical idea in the early 1990s, which has blossomed into a technology now employed in nearly all aspects of civil, commercial, and military space. When presented with a challenge by NASA to create a viable architecture for imaging exoplanets, Aerospace provided a solution built on a legacy of nearly 30 years of persistence, innovation, and company-wide teamwork.

“When you have something that is out of the realm of the standard way of doing things, it forces smart people—and we have many at Aerospace—to think about bigger possibilities,” Helvajian said. “It presents them a challenge to find out whether the technology and vision is feasible based on engineering and scientific principles. There’s an inherent quality within the people here at Aerospace that like to take on big challenges. They want to apply their expertise and skills to the hardest problems that exist. It’s not necessarily driven by a financial or external motivation. It’s something that is innate in them. That is powerful and it’s critical for us to nurture that spirit.”

Aerospace scientists and engineers thrive in a matrix of technical breadth and depth where interdisciplinary teams can solve the hardest problems. In the length of time since Aerospace started the small satellite revolution, photons from a possible habitable planet will reach our solar system, and because of Aerospace ingenuity, will be captured afar but studied here on Earth.

This is a modified version of a Delivering Value article, which highlights stories and accomplishments that exemplify Aerospace’s corporate values in action in support of our customers across the space enterprise.